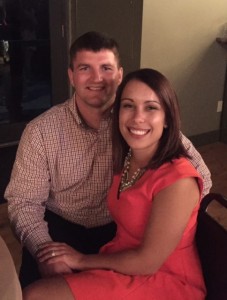 Kevin, with his wife Lyndsay, are expecting a baby in June.

Kevin Zlomke’s day begins at 7 a.m. with a simple routine. Sitting at his desk, coffee in hand, he sifts through pages of data – scrubbing funds, updating numbers, and making sure the previous day’s trades are accounted for – readying it all for the day ahead. From there, anything can happen. “All of a sudden you could get a million-share trade coming across your desk,” said Zlomke, who heads CLS’s Institutional Trading Team, “and you have figure out how to work it.”

In fact, that’s just what happened on a recent Monday. Zlomke’s team of three was tasked with selling one million shares of an ETF that has an average daily volume of about 100,000 shares. Quickly, they had to decide whether to go with a broker or make the sale using their own direct market access, an option with a lot of appeal. “If you send it to [brokers], these guys are so big, and their books are so big, they get executed like that,” Zlomke said, snapping his fingers, “So they’ll just give you the bid right away.” Going at it alone can improve price execution; but this was a big trade, and they needed big guns. Quietly, the team had to figure out who had inventory on their books and who could get them a good price, all while keeping information “slippage” down. “You don’t want to leave a big footprint,” Zlomke said. “People on the street can’t know what you’re doing, or they’ll just start picking you off.”

A covert operation with exactly the kind of high-stakes juggling act Zlomke enjoys.

“I think it built the mental toughness needed”

Zlomke, who has been at CLS for 12 years, grew up in Lincoln, NE in a family of three boys. In the fifth grade he had an early lesson in rising to new challenges. He took up wrestling, a sport that requires tremendous dedication and discipline on and off the mat, which his older brothers had excelled in and pushed him to try. “That’s a sport that takes a lot of mental strength to get through,” Zlomke said. “I think it built the mental toughness needed to get into a career where you have to push yourself.” Zlomke also played baseball, soccer, and football in school; he was passionate about sports and focused on pushing himself, competing, and overcoming adversity. After high school, Zlomke enrolled in Nebraska Wesleyan University, a private liberal arts college that encouraged him to try different things. But he kept coming back to business and finance. He graduated in 2004 and took a position at CLS in the new business department. A manager role opened up shortly after, and Zlomke got the job. A few years later, he was ready for a new challenge and moved over to the trading desk as a manager.

Today, Zlomke is married and getting ready for another juggling act, a new baby, in June. It’s a time that reminds him to take stock and be thankful his position has a higher purpose. “You’re managing these people’s life savings,” he said. “That’s important, and I take that very seriously.”

Zlomke wants to keep learning, improving, and gaining more knowledge within the financial industry to be ready for whatever comes. And he wants to help CLS adapt as the industry changes too. That’s why he has expanded relationships with New York brokers to keep improving CLS’s ability to execute good trades. Those relationships helped his team find the right solution to that million-share trade mentioned in the beginning.

“You can’t make a big mistake”

After covertly courting brokers, Zlomke found the perfect one and made the trade at a great price. Zlomke credits his team, who he trusts “100 percent to do anything that we need to get done” and who excels in a job that requires special skills and attention to detail. “You can’t make a big mistake on these trades, right?” he said. “You’ve got to make sure you’re getting everything done correctly, or else the errors are astronomical.”

While Zlomke is always on the look-out for new challenges, for now he’s happy where he is at CLS. “It’s different every day,” he said. “It could be a little bit of a slow day, or the craziest day of your life.”