A Treacherous Question: How Do Risks Compare to Potential Rewards? Advisors have a lot on their minds. In addition to worrying about regulators and a tendency to watch too much politically-slanted news, advisors seem extra-concerned about markets lately. While most questions I receive from advisors focus on a narrow market segment, a recent question captured the essence underlying a wide range of inquiries.

The advisor asked: “How do risks compare to potential rewards?”

While the question is well stated and thoughtful, its underlying assumptions invite investors to emphasize factors likely to undercut their portfolios. Taken to its logical conclusion, it tempts investors to become market-timers. This article will discuss three dangerous assumptions that lurk behind this question:

During the Gulf War, Secretary of Defense Donald Rumsfeld uttered one of the wisest things about risk ever said:

Many risk models focus on quantifying the known unknowns and turning them into probability estimates. But these models assume the factors examined are the risks of greatest concern. While this analysis is important and valuable, our risk systems must allow for the unknown unknowns that can surprise us at any time.

There is value in assessing known risks. There is greater value in humbly admitting that a placid market can be quickly disturbed by something we never imagined.

Assumption 2: Investors Can Understand How Markets Will React to Events

George Osborne, until recently the British equivalent of the Treasury Secretary, predicted turbulent financial markets, low labor productivity, and a weak global economy would make for “a dangerous cocktail of risks” should Britain vote to leave the European Union.

Voters ignored warnings by Osborne (who did a very good job helping Britain recover from the financial crisis) and others and voted to leave anyway. While markets sold off sharply on the news, they have since recovered, and global markets are up 2.23% since the vote in late June.

News is often shaped by how policy makers react to it, and this complicates the process. Predicting the event is only half the battle.

Ben Inker of GMO, summarizes the challenge of the first two assumptions this way:

“To a very significant degree, markets, in the short term, are driven by “news” — events that would have to be predicted ahead of time to properly guess what the markets will do in the future. This task is complicated by the fact that even given an accurate prediction of news or surprises, which for this purpose are synonymous, predicting the actual response of the market is surprisingly tricky, because the connections between data and events and stock market performance are often unintuitive.”

Assumption 3: Predicting Risky Events is a Fruitful Form of Research

Even if investors can overcome the challenges of predicting events and market reaction, it still may not be worthwhile to pursue estimating the risk in markets. Investors possess limited time for research. Sifting through websites and gluing yourself to cable news needs to be more profitable than putting greater emphasis on areas of greater importance. What markets offer low valuations? What corporations and countries are experiencing healthy growth?

Investors I know, who watch a lot of news, tend to experience more stress than success. Short-term focus leads investors to miss key rallies and take on too little risk most of the time.

Instead of trying to read the risk levels of our time, Risk Budgeting tacitly assumes risk remains equal. At first, this idea seems difficult to accept. But risk outcomes narrow significantly as time frames expand. The chart below shows the standard deviation of the S&P 500 measured weekly since 1986. The first line measures the standard deviation every six months. The second measures it every 10 years. While the short-term risk spikes and troughs frequently, the 10-year risk stays in a narrow range around 14-16. 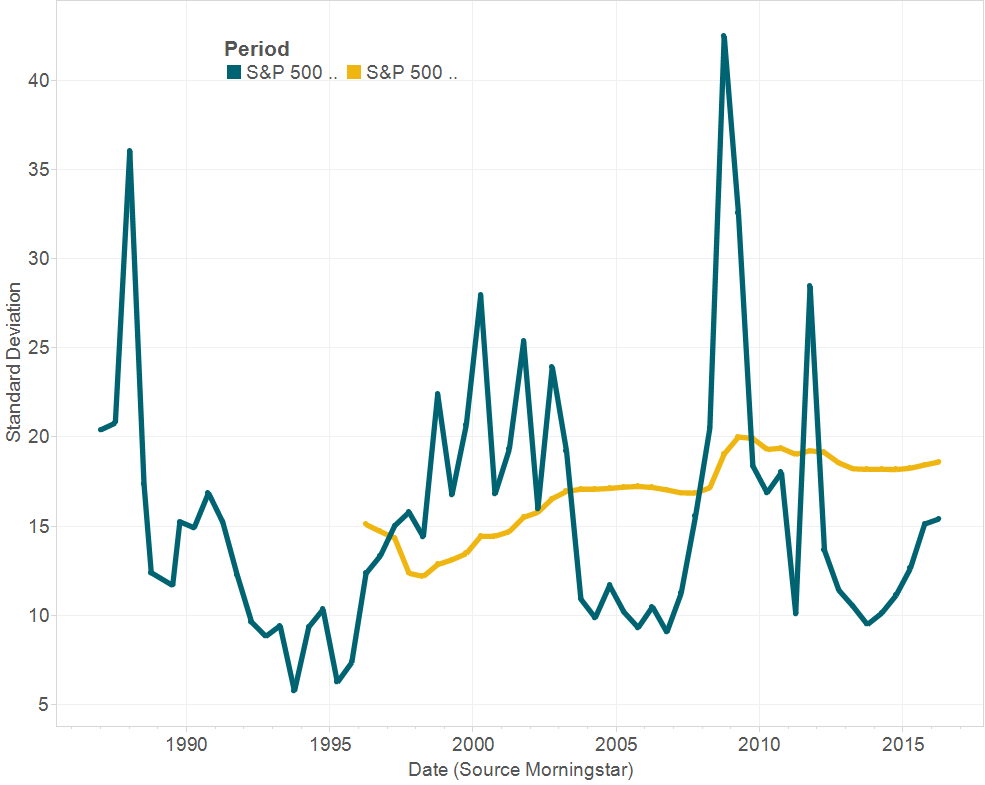 The graph also points out an important aspect of risk. Elroy Dimson of the London Business School, defines risk as more things could happen than did. In some years the risks came to be and volatility spiked. In other years they didn’t, and markets were excessively calm.

Over the longer term, these events tended to average out. So stay away from market-timing, under any guise, and don’t spend your days watching the news for the next big risk. Instead, focus on taking the long-term risk you can handle in pursuit of a more meaningful life than staying glued to CNN.