Bailey Neben was scanning the Babson College alumni directory when she realized she was just one of 13 Nebraskans to ever attend the Boston-based university. Who were these fellow Cornhuskers? What drove them to the East Coast? Did they ever go back home? She started wondering about this small circle and wanted to know more. She also wondered if anyone in the group might be able to connect her to opportunities in the real world. So, she decided to reach out. She sent a note to each name on the list, and — happily for CLS — one of those names was Rusty Vanneman.

“Bailey impressed me from the start,” Vanneman said. “She is bright, eager, and full of energy.” They met in person at the CLS office over her winter break. “At first, I was just contacting him to find out his story,” Neben said. “How did he get to Babson and when did he go back to Nebraska? Then it became: ‘What am I doing over the summer?’” As sophomore, Neben presents herself with confidence and poise, taking charge of a room and articulating her thoughts and ideas with self-possessed style. She is concentrating in accounting and finance at Babson, leaving both doors open while she figures out which career path suits her best. Today, she is wrapping up an internship at CLS where she split her time between sales and portfolio management. More doors left open: two of many she is likely to have in her future.

“I wanted to break out of my box”

Neben grew up in Waverly, Nebraska. It’s a small town of about 3,700 people just outside Lincoln. She attended the same school for 11 years and saw the same faces every day. “I was with the same 140 people in my class my entire life,” she said. She noticed the people who graduated ahead of her stuck within their own familiar circle, and she wanted something more. “I wanted to break out of my box,” she said, “and meet new, different people that weren’t from Nebraska.”

So, Neben decided to head to the East Coast. She wanted to be near a big city where there was always something to do and opportunities abound. She was drawn to Babson because of the college’s focus on academics. She’d always been good at math, so she knew she wanted to do something with numbers. In high school, she had taken an accounting course that she loved where she had to manage a fake company’s books. It was a two-month project that she finished in two weeks. “I did that for hours at home just because it was fun for me to do,” she said.

Going to Babson was tough at first. She had to make new friends, and for the first time in her life she couldn’t turn to her parents or older sister, who she has always looked up to, for help. “It was a big change for me,” she said. “But it gave me some independence.” The transition was helped by the amount of diversity at Babson. Neben knows the figures by heart: Babson is 30% international students; within domestic, it is 50% multiracial with 48 states represented. “It gave me a new perspective on all the other things that are out there,” she said. 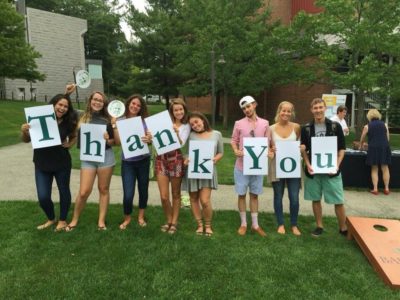 Founder’s Day at Babson College. Bailey Neben can be seen holding the “n”.

Neben soon settled in. She joined a sorority and Babson’s theater group and became a career advancement ambassador, giving campus tours and meeting alumni. But, she was still thinking about the Nebraska alumni. Her meeting with Vanneman had gone well; he had offered her an internship back home, and she was excited to take it.

She began at CLS in May. Her internship is part sales and part portfolio management. On the sales side, she’s helped get proposals out to advisors and put together a list of self-directed plans. “Jobs that make [the sales team’s] lives easier,” she said. In portfolio management, she has helped Kostya Etus write a paper on Environmental, Social and Governance (ESG) investing and Josh Jenkins work on a CLS certification project. She’s hoping it will be complete by the end of the summer so she can see the end result of her work. “It’s been amazing,” she said. “I don’t think any of my friends have internships where you’re actually doing real things.”

Neben says she’s also learned about what it takes to work in an office — an environment she thought would be very different from the collaborative atmosphere at CLS. “I was thinking it would be more cutthroat,” she said. “But everybody’s friendly and very professional at the same time.” She said she’s grateful to the team for helping her every way they can — even making introductions to people outside the office that have already led to new opportunities. “It’s not just about them,” she said. “It’s about me, too, and I’m grateful for that.”

Vanneman says Neben has exceeded even his “lofty expectations.” “I always expect members of my team to give 100%, which Bailey was able to do from nearly day one,” he said. “She has been a very high producer, in addition to being fun to be around.”

Before Neben leaves CLS, she’ll spend a few days in the accounting department getting a feel for how things work there. She’s still not sure which way she’ll go. She enjoys accounting because it’s straightforward and focused on rules and processes, but she likes finance too because it’s the opposite: different every day and subject to market whims and global events. The portfolio management team is “definitely not doing the same thing every day,” she said, “which is really intriguing.”

Next summer, Neben hopes to secure an accountancy internship through Babson, so she can get a proper feel for that side of the financial world. In the meantime, she has a few words of advice for the next intern at CLS: “No question is a small question,” she said. “And take as much work as you can.” In other words: Open as many doors as possible.