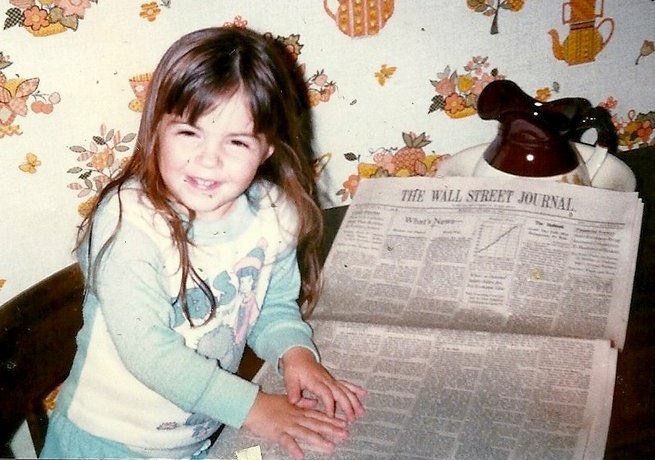 Shana with a copy of the Wall Street Journal. She says her family always knew her interests were a little different from the rest of them.

Shana Sissel has survived not one, but two terrorist attacks. On September 11, 2001, Sissel was on the 64th floor of World Trade Center Tower 2. On April 15, 2013, she was three blocks away from the finish line of the Boston Marathon.

Her frightening experiences, along with her childhood as the daughter of a police officer who shared his terrifying tales, have toughened her. And that toughness has given her an edge in her career — one where emotional decision making doesn’t get you very far.

“Bullets in the junk drawer and evidence bags for lunches”

Shana Sissel grew up in Worcester, Massachusetts, a city about 40 miles west of Boston and considered a suburb of the bustling metropolis. She’s a first-generation American — her mother was born and raised in Ireland; her father is Polish. She grew up painting pisanki (hard-boiled eggs) for Polish-themed Easters and watching the city turn green each spring in celebration of St. Patrick’s Day. Her grandparents’ siblings all lived within two blocks of each other, so her extended family was always around. “We were very family-oriented,” Sissel recalled, “almost forcefully so.”

Sissel’s father was a police officer in Worcester, an area with substantial crime, which often made his job dangerous. “My father was involved in all kinds of shootings,” she said. “He had lots of crazy cop stories.” As a kid, she didn’t hear the worst ones. But as she has gotten older, he has filled in some gruesome details (one often-told tale involves a decapitated head). Sissel says she finds it hard to explain what growing up as a “cop kid” was like because that’s all she has ever known. “It’s cool when you’re eight and your dad takes you to school in the cruiser with the sirens on. And of course, it makes dating interesting when your dad shows up in uniform with a gun.” Other than that, she sums it up this way: “We always had bullets in the junk drawer, and my mom used evidence bags for lunches.”

Sissel’s mother was an inner-city school teacher, and she says her parents urged her to find a similar blue-collar career, one with the safety of a union and a pension. “But that just wasn’t me,” she said. “My family all says I’m a different animal.”

When Sissel thought about what she wanted for her future, she thought of her uncle, Stan. He was a self-made man who worked his way up to owning an oil company and becoming very wealthy. She remembers being impressed as a child that he drove a Mercedes-Benz and handed out generous checks for Christmas. “My grandmother idolized him,” she said. “When he was coming to visit from New York, everything had to look perfect.”

After receiving her bachelor’s degree in sports management, Sissel began considering a career in finance. She called her uncle for advice, and he told her to go for it. So, in May 2001 Sissel took the first step with a position at Morgan Stanley as a financial advisor. She loved it.  “I loved learning about the markets, listening to the analysts, and just being part of the glamorous world of finance,” she said.

On September 11, 2001, Sissel was working at Morgan Stanley at 2 World Trade Center when terrorists hijacked two planes and careened them into the Twin Towers. She says she and the other 2,500 employees owe their lives to the chief of security at Morgan Stanley, Rick Rescorla, who evacuated the building as soon as the first plane hit Tower 1, ignoring orders by the Port Authority to remain. Even as the building shook and went dark after the second plane hit, Rescorla kept the employees moving down the stairs, singing war-time battle songs to keep their spirits up. Morgan Stanley lost six employees that day. Rescorla was one of them. He went back in to the building to make sure everyone was out, and that’s when it collapsed.

Sissel was shaken by the experience. For the next few months, she was in limbo while the firm figured out how to get everyone back to work. She used the time to learn about building portfolios, research stocks and mutual funds, read about the markets, and recover from the trauma of what had happened.

“I certainly don’t have rose-colored glasses”

Two years later, Sissel took another step in furthering her financial career by enrolling in an M.B.A. program at Bentley University. In 2004, she was hired at Fidelity Investments as an internal wholesaler and investment analyst. Three years later, she moved to Seattle for a position as an equity portfolio analyst with Russell Investments, and in 2008, she moved back to Boston to join Peak Financial Management as a research analyst and investment strategist.

It was there that Sissel discovered perhaps one of her favorite aspects of working in finance: talking about it. At Peak, she became the go-to source for numerous financial publications. She was interviewed by the Wall Street Journal and the Financial Times. She was a regular on local news programs in Boston and was featured on CNBC. She loved it, and she excelled at it. “I like to be the center of attention,” she said, “and that really played into that aspect of my personality.”

The founder of Peak later retired, and Sissel moved on to Mercer and then returned to Fidelity as a fundamental research analyst for Strategic Advisers. She was responsible for identifying investment disciplines and recommending managers to execute, and she felt like she’d come full circle in her career.

Then, another terrorist attack jolted her world. On April 15, 2013, Sissel was three blocks from the finish line of the Boston Marathon when two homemade pressure cooker bombs exploded, killing three people and injuring hundreds.

Similar to the fog of 9/11, the days following the bombing were a haze of trauma and grief in Boston, exacerbated by the manhunt to track the bombers. Sissel’s family was intimately involved. Her sister is a 911 dispatcher, so she told Sissel about the shelter-in-place order before most had heard it, and her brother-in-law is the head of SWAT for the Worcester Police Department, so he provided backup for the Boston police and FBI as they tracked the bombers. It was a shared trauma that united the city of Boston. “My instinct was to help the people around me prepare and deal with the emotional toll of the experience,” Sissel said. “In a weird way I was really proud to be in Boston through all that.”

The experiences of growing up hearing about violence and danger and then living through two of the worst attacks on U.S. soil have shaped the way Sissel views the world. “I’ve gotten very close to stuff that is very distant to a lot of people,” she said. “I certainly don’t have rose-colored glasses, and I think I have a healthy level of paranoia.”

They’ve also hardened her to a degree, which, luckily, is a valuable quality as an investor.  “I’ve been through emotionally traumatic things. And that means — as an investor — other people’s emotions don’t influence me as much.”

Sissel is also resilient. And tough. As a professional, she is unafraid to play devil’s advocate in meetings and push people to see the other side. She’s curious and always looking for more information — even when it proves her wrong, sometimes particularly so.

In fact, she’s just the kind of person that CLS Chief Investment Officer Rusty Vanneman would want to work with. Vanneman and Sissel have a mentor in common: Art Lutschaunig, the founder of Fidelity Strategic Advisers. That’s what prompted Sissel to look up Vanneman after she moved to Chicago with her husband and now-three-year-old son to be closer to her husband’s family.

“Art has a certain kind of person that he hires that does well,” Sissel said. “People that don’t keep their opinions to themselves and are not afraid to take risks or think outside the box. Rusty is that kind of person, and so am I.” Sissel applied for a remote position at CLS and came on board as a portfolio manager in September 2018.

While it has been a winding road to get here, with more than enough challenges to overcome, the journey has made Sissel an asset as an investment manager, and she will no doubt make her mark at CLS. As she describes ‘Art’s people:’ “We’re tough. And that makes me good at what I do.”