Is a Recession Really That Bad?

“The past can hurt. But the way I see it, you can either run from it or learn from it.”
–Rafiki, The Lion King (1994)
A potential slowdown in the economy and the prospect of a recession has been a hot topic lately. Let’s take a closer look at some of the key economic indicators to figure out how close we may be to a recession. Further, we will evaluate the ever-important question: If a recession does come about, what will it mean for the markets?
To help me illustrate my points, I will use a couple of beautiful charts from Capital Group, a great partner of ours and fund manager for the American Funds.

What are the signals that indicate a recession is near?

Here are four economic indicators that can warn of a recession:
Inverted yield curve
While some parts of the curve have inverted, the more commonly referenced 2-year/10-year yields have not inverted. Even if they do invert, there are typically 16 months that follow before a recession starts.
Corporate profits
S&P 500 earnings may have peaked in the third quarter of last year, but there is a whopping 26-month lag on average before a recession.
Unemployment
This is at some of the lowest levels in history; nothing to worry about here.
Housing starts
Millennials are slow to move out of their parents’ basements – housing starts are flat.
There are also aggregated metrics, such as the Leading Economic Index, which has been a reliable predictor, and it is not flashing any major red signs.

Conclusion: A review of key economic indicators and the aggregated Leading Economic Index does not suggest a recession is coming any time soon. But these indicators do suggest the beginning of some weakness in the economy.

But even if the recession does happen, will it really be that bad?

Recessions are typically infrequent and short-lived, and they appear as small blips when looking at the big picture. They represent only 15% of all months evaluated.
Because some of the strongest stock rallies happen in the late stages of a recession, the average S&P 500 return during a recession is actually positive.
We believe that investors with a long-term investment horizon are better served staying diversified and invested.

Conclusion: Recessions certainly don’t appear as bad when you compare them to the strength and length of historic expansions. A key takeaway is that average market performance during recessions has actually been positive. 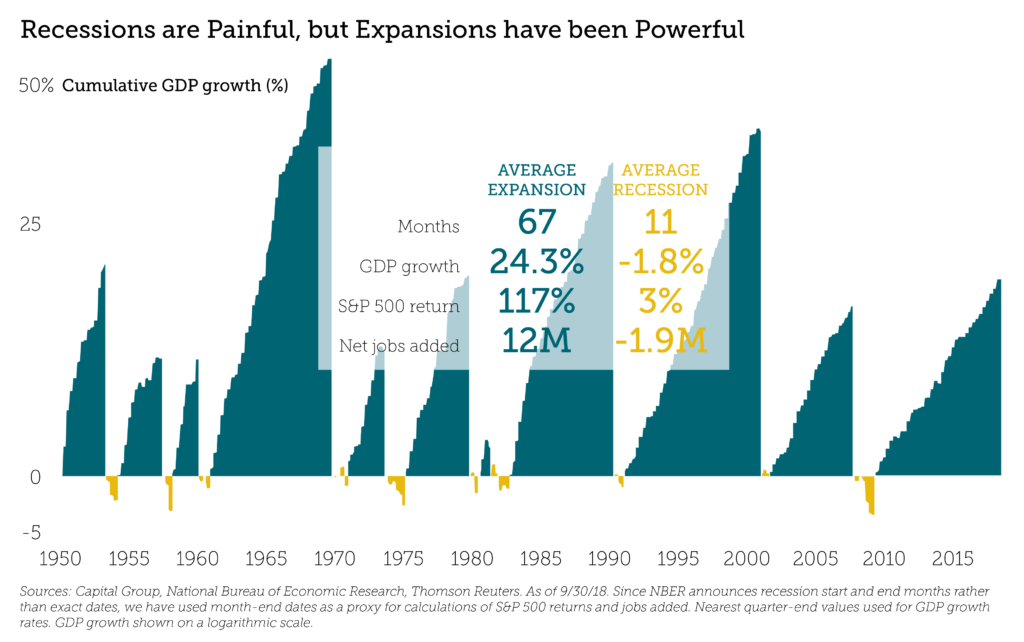