Smart Beta: Back to Basics We are three quarters down in 2016, and we can definitively say that smart beta is here to stay — in CLS portfolios and the industry as a whole. At CLS, our X-Factor theme, which is based on our use of smart beta ETFs, has been extensively covered in direct commentary from CLS and through various media outlets, such as ETF Trends’ ETF Strategist Channel. That being said, it’s worth heading back to square one and take a look at the investment trend taking the industry by storm.

First, let’s dissect the term smart beta. Not to be confusing, but we’ll start with beta. Beta is technically a statistical measure showing the degree of co-movement with the market. For instance, a beta of 1.5 implies a security should capture 1.5 times the return of a benchmark and 1.5 times the risk. It works similarly to our Risk Budget score (in fact, it’s a key component).

With beta comes alpha, which is the amount of excess performance when adjusting for beta. Stay with me here! For example, let’s say a mutual fund has a beta of 1.5, and it returns 20% in a given year. The index it’s measured against returns only 10%. Given a beta of 1.5, we would expect the fund to return 15% (1.5 times 10% return of the index), but in fact it returned 20%. That extra 5% is alpha. Index based ETFs capture beta. The beta of SPDR S&P 500 ETF Trust (SPY) versus the S&P 500 should be right around 1. No alpha gained, just beta exposure.

Now we’ll get to smart. Below is a fake ETF based on a made up 10-stock index. Pretty simple: the weights are the same as the index. It’s delivering pure beta exposure. It’s not stupid, but for our purposes here, it’s not smart either. 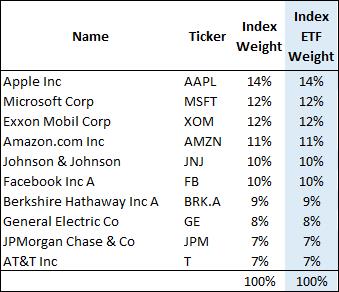 So, what if we used some other information to change way the ETF is weighted? How about a factor, such as value? In that case, we drop the five stocks with the highest price-to-earnings (P/E) ratios and only hold the names with the lowest P/E ratios (most attractively valued). 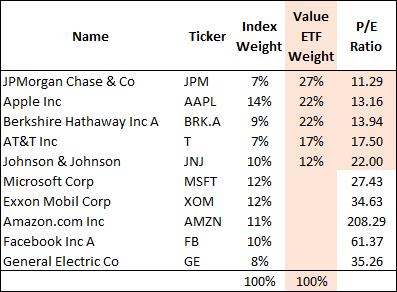 Now we are starting to get smart. Our new smart beta ETF holds five stocks weighted by valuation. Our beta may be close to the market index (1), but since value is proven to work over time, we should add some alpha as well. Additional factors could be added – such as quality or momentum – and we would have ourselves a multi-factor smart beta ETF.

The end result is an ETF that doesn’t track a traditional index, since we cut off the high value names and sorted it by the most attractively valued companies, but it also doesn’t rely on a portfolio manager picking individual stocks. So it’s neither fully passive nor fully active. Many of the factors that are used to create smart beta ETFs (such as value) have proven over time to not only outperform traditional indices, but a lot of active managers. And, of course, in the ETF wrapper, investors get the benefit of much lower expenses and potential tax benefits. 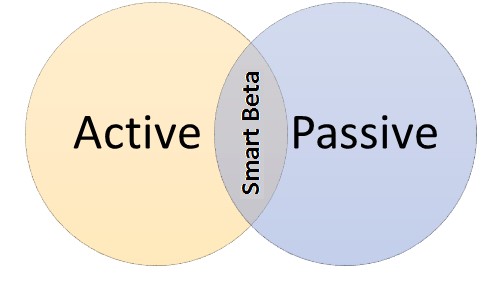 The graphs and charts contained in this work are for informational purposes only.  No graph or chart should be regarded as a guide to investing.