The Market ≠ The Dow 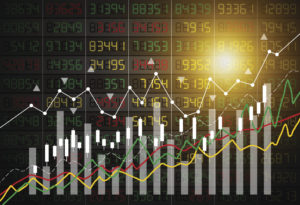 How often do you hear that comment? Some of my family members who have no market knowledge even referenced movements in the Dow Jones Industrial Average (DJIA). There are so many questions that come to mind when I hear that comment. What market? What does 100 points mean? What is the Dow even made up of?

The Dow Jones Industrial Average is a price-weighted index of 30 blue-chip companies in the United States, selected by a committee. The “Dow” is named after Charles Dow, a Wall Street Journal editor and founder of Dow Jones & Co. The “Jones” is actually named after one of Dow’s business associates, Edward Jones (ever heard that name?). The index was first launched in 1896, making it one of the longest running measures of stock market performance we have. Stock market history is intensely fascinating (to me at least). However, given the index’s history, ties to the media, and familiar status in the minds of Americans, it’s easy to see why it’s remained prominent. There is no denying that an investor replicating the index over any reasonable length of time would be handsomely rewarded. But, there are still a number of flaws to consider.

Let’s break down the description I laid out earlier – “a price-weighted index of 30 blue-chip companies in the U.S.”

The index is price–weighted. That means stocks with higher share values have a larger weight and impact on the index. For example, Boeing has the largest weight in the Dow (more than 7%) due to its $233/share price. Apple, on the other hand, has a 4.8% weight due to its $153/share price. Meanwhile, the market cap of Apple is almost six times larger than Boeing. Weighting an index by something other than market cap is a good idea (see smart beta), but share price really doesn’t mean much of anything. This price weighting ends up translating into specific point moves for the index. Hearing “Dow up (or down) triple digits” is commonplace and typically elicits some kind of emotion, whether positive or negative, even to the lay person. But, the truth is triple-digit moves are now borderline insignificant. As the price of the index has risen, triple-digit moves represent less than half a percent! 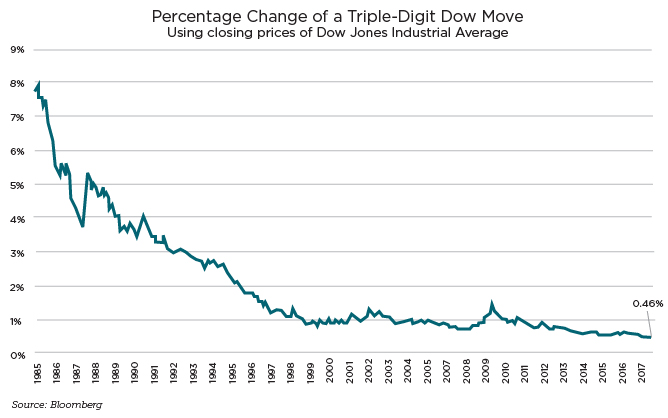 There are 30 blue-chip companies in the index. Meanwhile, there are something like 4,000 listed stocks (that trade actively) in the U.S. and multiples of that number overseas! In the age of railroads and conglomerates, 30 stocks could maybe capture the full picture, but it just doesn’t cut it today. Major staples of American industry, such as Google’s parent company Alphabet, aren’t even included! Alphabet has revenues higher than 23 Dow components and a market capitalization higher than every component except Apple. But, even more than the size of these companies, included or not, is the growth potential of small- and mid-cap firms. America is a growth story, the heart of capitalism and innovation. These blue chips are no doubt innovative too, but they may not capture the true essence of America.

There are 30 blue-chip companies in the U.S. It’s safe to say the world has become immensely more connected since 1896. At CLS, we are global investors and believe the investment opportunity is tremendously broader than the 30 blue chips referenced daily. While these are certainly large companies, and still command 11% or so of global market-cap, the sheer number of investment opportunities out there in other countries dwarfs the exposure from the Dow firms.

It’s unlikely the Dow will be removed from ticker tapes any time soon – although I did hear a commentator mention some of the index’s flaws recently. Coaching our investors and advisors to focus on a broader index, even just the S&P 500 (which also has its drawbacks) can go a long way. The MSCI All Country World Index may be a ways off for my family to reference as the market (although I’m training best I can), but the investing world is going that direction whether it’s convenient or not.